The watchword of Holocaust lessons is, “Never Forget.”

But once there are no longer survivors to recount their personal stories, what then?

Two Emmy-winning television producers from Los Angeles, Amber Howell and Janice Engel, and New York-based photojournalist Josh Rothstein came to Hampton Roads in March of 2010 to extensively interview and film survivors David Katz, Dana Cohen, Hanns Loewenbach, and Kitty Saks. Using new and archival footage, as well as photos of all of the artifacts and memorabilia the four still had from their Holocaust experiences, they created four short films, one based on each survivor’s experiences and reflections.

Sadly, because David Katz and Hanns Loewenbach both passed away in January 2012, What We Carry could not have come at a better time. Until they literally no longer could, they repeatedly shared with others the often terrible realities of their experiences during the Holocaust, to teach the message that Hanns stated so brilliantly: “Evil does not need your help; just your indifference.”

In 2014, the filmmakers returned to film survivor, Alfred Dreyfus, liberator, Bill Jucksch, and rescuer, Dame Mary Barraco, and we added their stories to our What We Carry library. But time has taken its toll, and by 2021, we had also lost Bill, Mary, and also Kitty Saks.

Trained volunteer docents have presented the films to schools, community groups, and military audiences since 2012, in combination with a vintage suitcase filled with replicas of their treasures, created by graphic designer and artist Perry Deglandon. Docents travel up to an hour’s drive to share these presentations. We will work with you to meet safety protocols of your organization, or can provide a docent for a live Zoom presentation as well. To schedule one for your school or organization, email info@holocaustcommission.org.

We pivoted to online presentations (with live Zoom docents) during the pandemic. As things open up, we will work with you to meet safety protocols of your organization.

A traveling version of the program is also available to educators outside the local area. Please contact the Holocaust Commission at info@holocaustcommission.org to schedule a presentation today!

This film is not intended for anyone under high school age.

Films and associated lesson plans can also be found on EMediaVA.org

The program has been presented at the Simon Wiesenthal Center in Los Angeles, the Virginia Conference of Social Studies Educators, the National Social Studies Conference, and the International Conference at Yad Vashem in Jerusalem. Since the Holocaust Commission began presenting the program in the fall of 2011, over 42,500 people have experienced it. Your group can too! 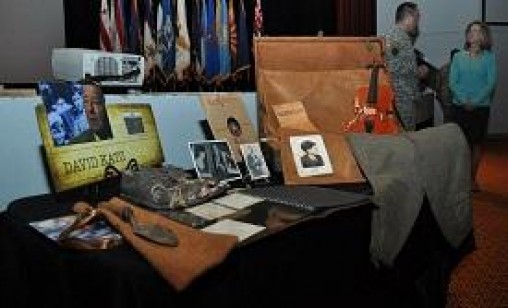 For more information about What We Carry, or how you can get involved, contact Elena Barr Baum, Holocaust Commission Director, at EBaum@UJFT.org or (757) 965-6129.