This is my illustration of hope. In the last year, we all experienced our losses, we’ve all been overwhelmed. I have too. However, seeing my sister maintaining her smile and children’s urge to play, to help, to live, made me realize how, joy still exists. Children are my heroes because they make me hope. So, from them is this piece inspired. In this acrylic painting, the smile that, even behind a mask, still shines, is a metaphor for the point that even if we’re feeling trapped, we aren’t. We can still help, nurture ourselves, communicate and radiate positivity from home. Nature thrives and welcomes us to enjoy it. For once we don’t hurt it, and it surrounds us most beautifully; similarly to the way that the flowers surround the smiley child in my piece. The pandemic has already cost enough. Let’s not let it cost our smiles. 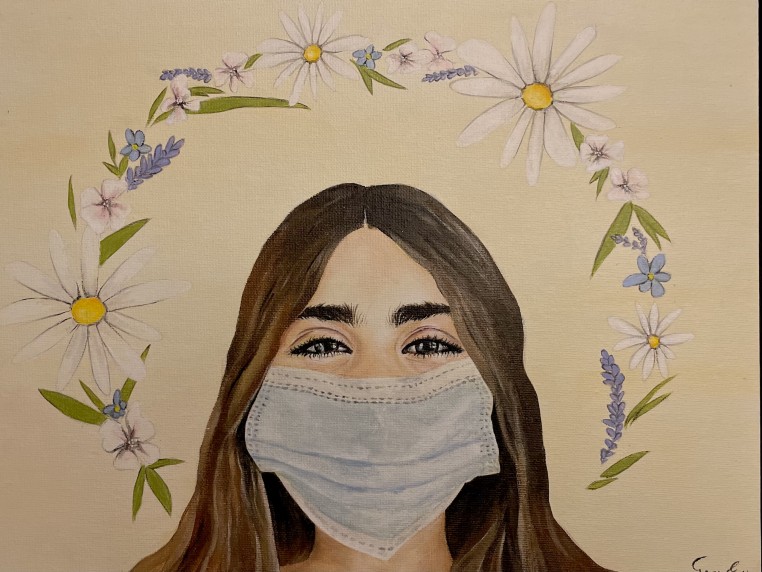 I called my project “Tied Down” because of the way that the heart represented the center of all different cultures and religions during the Holocaust and in the world. My drawing depicts how the heart tries to escape the hooks of pain and suffering. By pulling away, the heart tears a little on the sides showing that it has left the world’s culture with scars that can never truly be replaced/repaired. 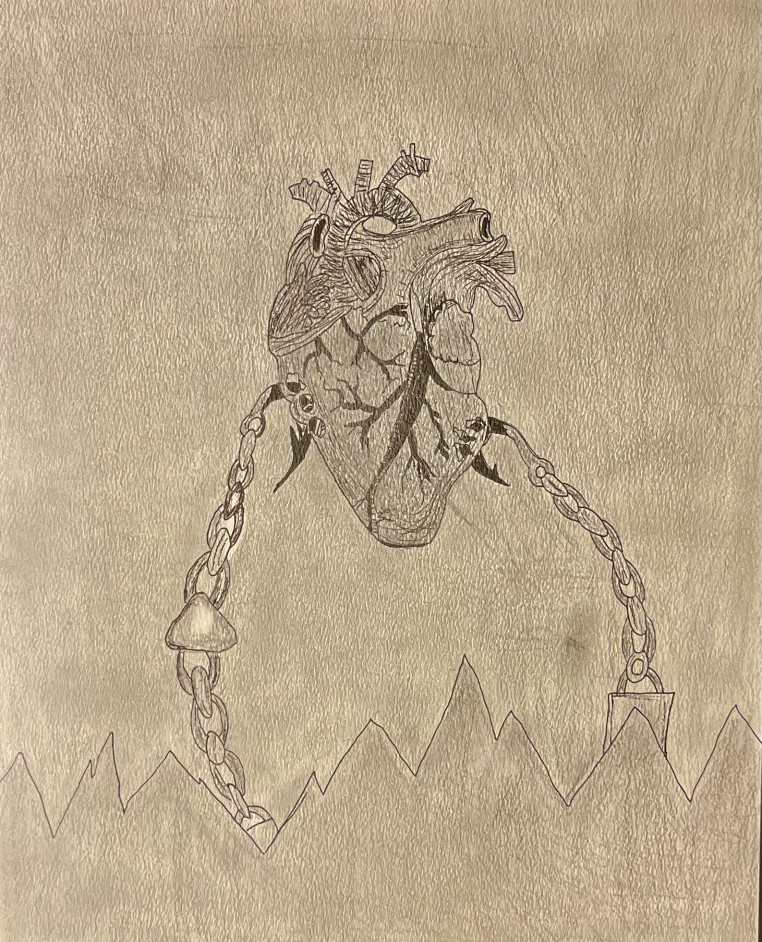 I believe, as a Black Mexican-American student trying to grow and survive during the isolation of a pandemic and growing racial disputes, that I am bearing witness to a unique time in history. Like the paper bag of my piece, living during this time there are moments everyone feels crumpled and torn, but remains standing. The blood dripping from the bag is representative of the blood that has been shed today from civil unrest and deaths from the pandemic. Blood, to some extent, litters everyone's hands if we continue to fail to unify. Yet it all represents a part of me as "my country."

Further, America as an empty crumpled brown paper bag shows how people are emotionally empty, hungry, and unemployed. This relates to today's history because America is bleeding out from the deaths from the pandemic, racial disputes, civil unrest, and economic and political division. I used charcoal for the maximum amount of shading/value and colored pencils to add color to the piece. The shades of grey represent that Americans are just shades of grey struggling individually and collectively with the issues of diversity, economic imbalance, and illness. The key to stopping the bloodshed is recognizing that we are more alike than different. We all hail under one country's banner. 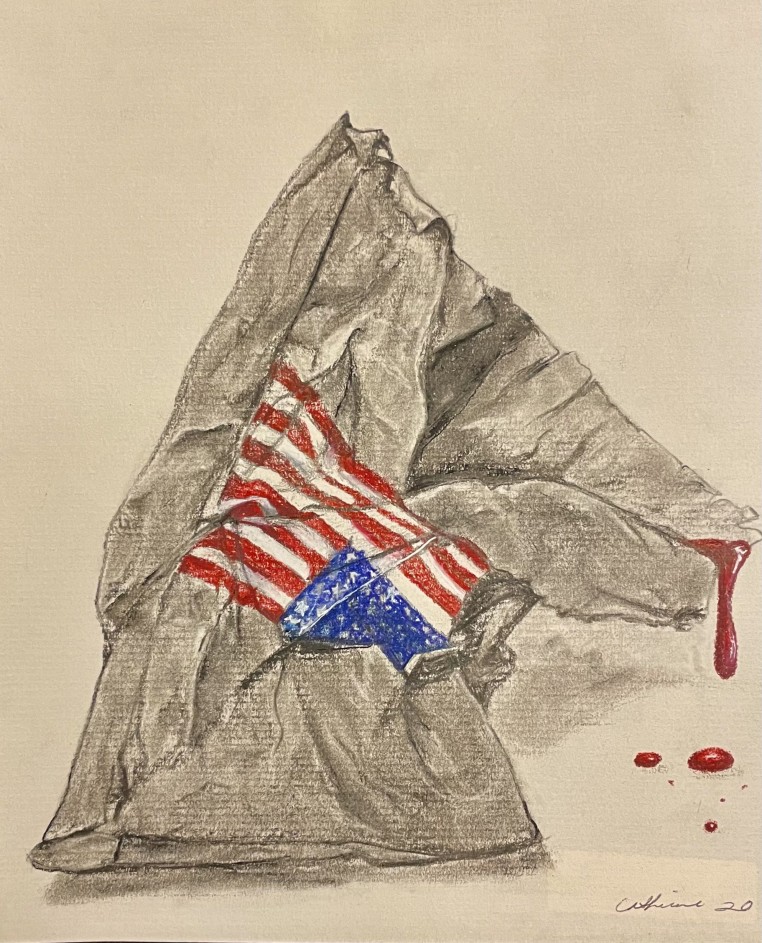 For this project, I wanted to depict how people have persisted through these difficult times due to the pandemic, riots, and political disputes. I chose a bear as the main symbol, which represents power and the power to stand up and resist which relates to our current times. The flowers surrounding the bear are called Black-Eyed Susans, which symbolize justice, and I learned that butterflies were a huge symbol of the Holocaust so I included black and red butterflies. The red butterflies represent power, luck, passion, courage, and an individual's willpower, while black butterflies represent change and the need to embrace change. The bear is wearing a traditional El Salvadorian dress, which represents me and my culture and how I have persisted through these hard times like those before me. 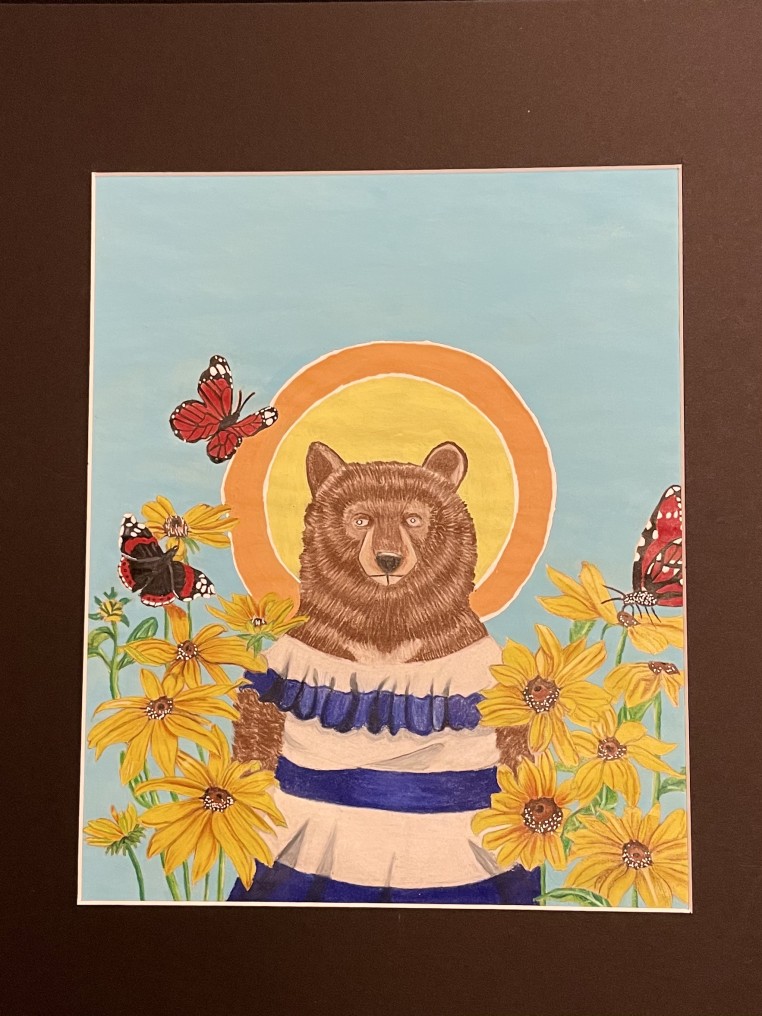 The title of the piece is “Sorgen'' - the German word for sorrow.  Humans have the ability to fight through sorrow and move towards a better life.  This could be shown by the Jewish people during the Holocaust and through minority groups who are fighting for equality in the United States. 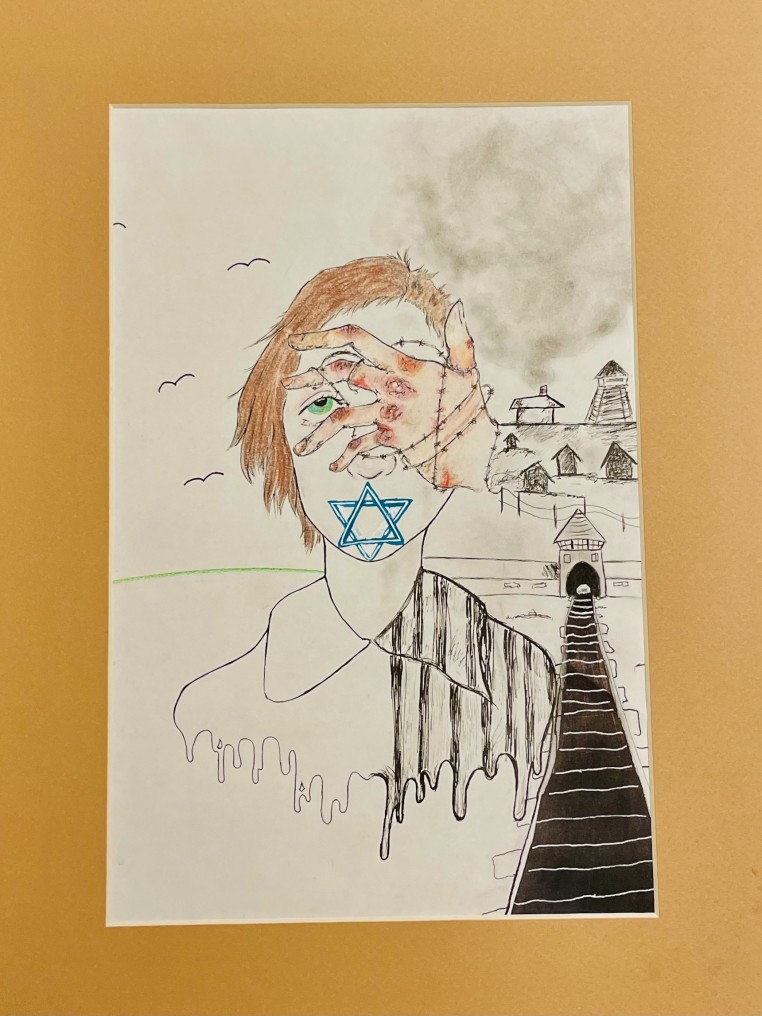 Making Light out of a Dark Situation

This drawing shows Lewis, who died of old age, and those around him being Black Americans that died unjustly to police brutality. This drawing is a memorial, and recollection for “The Long and Forgotten.” The African American people on the drawing are surrounded by yellow light repressing they went to a better place and humanity's hope for a brighter future. The contrast in color shows the emptiness that has stained this world and represents the sadness distributed because of all those lost. Lewis's crying represents the pain of the BLMM due to those of the Lost and Forgotten. 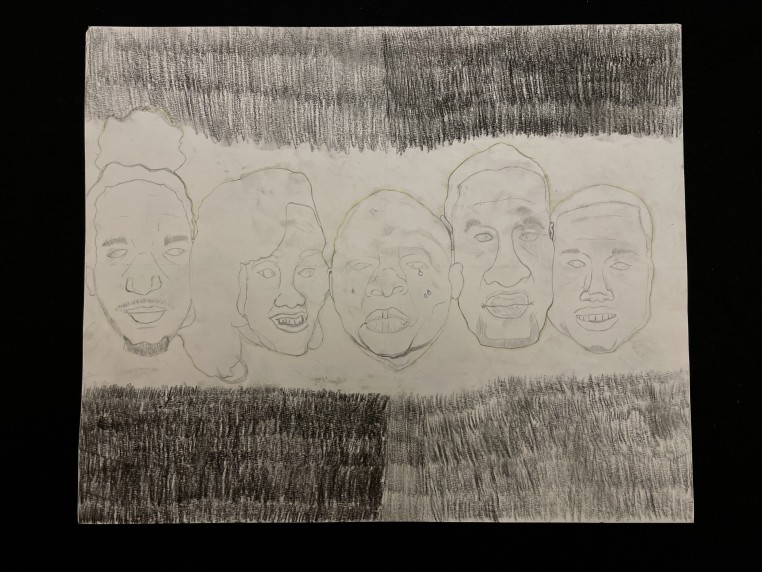 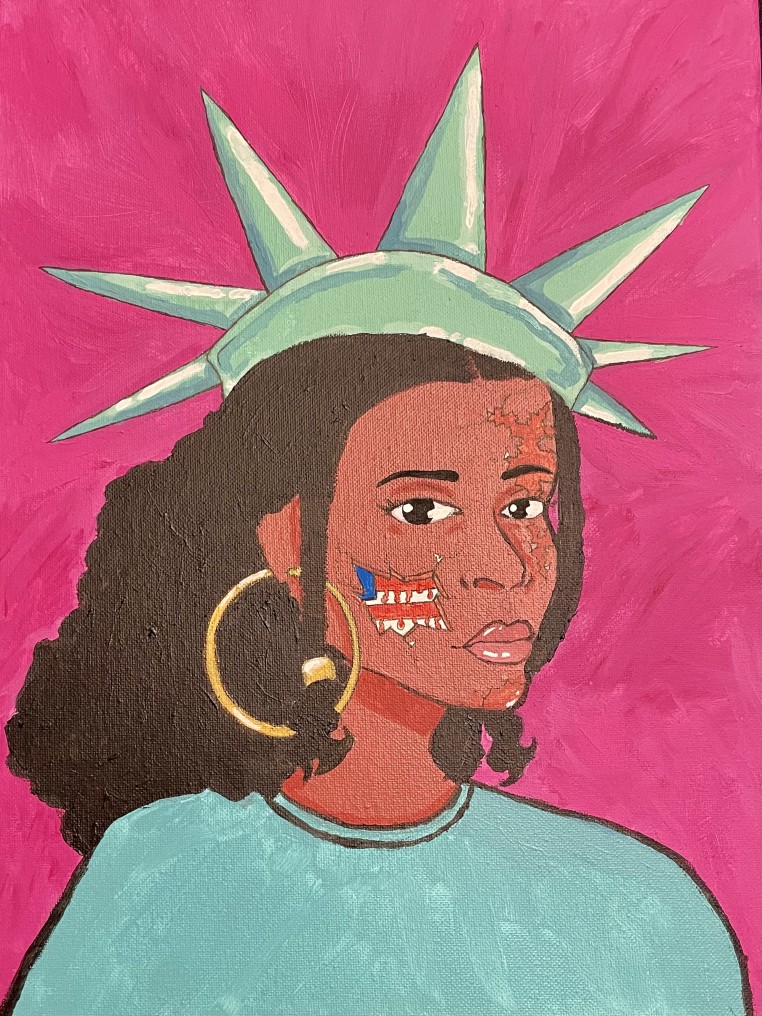 "Breaking News" is a statement on the partisan divide and political polarization experienced in the United States throughout the last several years, but specifically refers to its peak in 2020/2021 surrounding the election. The pointing hands represent the blame and polarization of political parties. The background covered in strips of the text titled “Breaking News” addresses the monumental amount of breaking newsworthy events in 2020 and the deep and long-lasting impacts they have piled one on the other, ie. BLM, the Coronavirus, the deaths of activist icons such as John Lewis and RBG, etc. Consequently, many of these events become polarized falling behind a political curtain hence the layer of text resting behind the pointing hands. 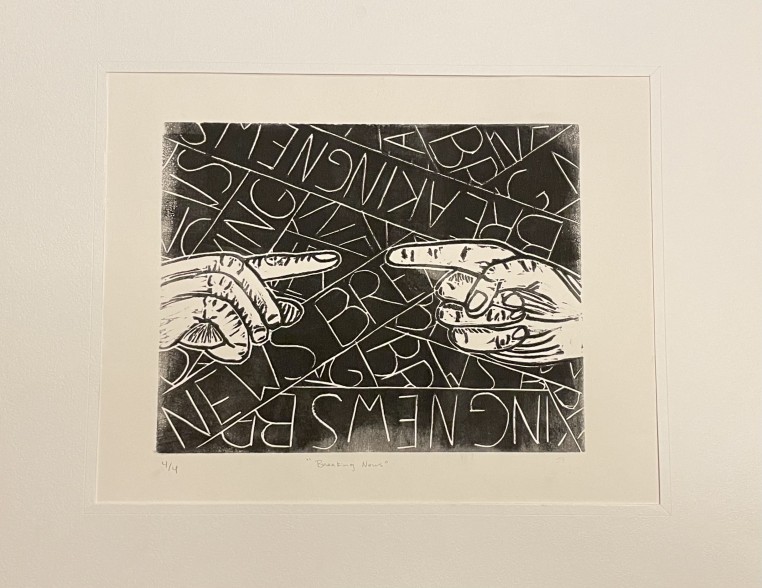 Is It All That Different?

My piece represents the good and bad in 2020. I made a tree to represent that the good and bad that have happened this year comes from the same base. The flowers and swing are there to show the youth, happiness, and innocence of 2020. The grave represents the death and destruction that has plagued this year. Flowers lay on both symbols to represent that while“ it was the best of times it was the worst of times... it was the spring of hope, it was the winter of despair” (Charles Dickens), we must respect both and learn to live with both while striving to make changes. There is good that comes from the bad and bad that comes from the good. Good and Bad branch from the same tree and to find the good in the bad will be what brings through happiness during the depression. 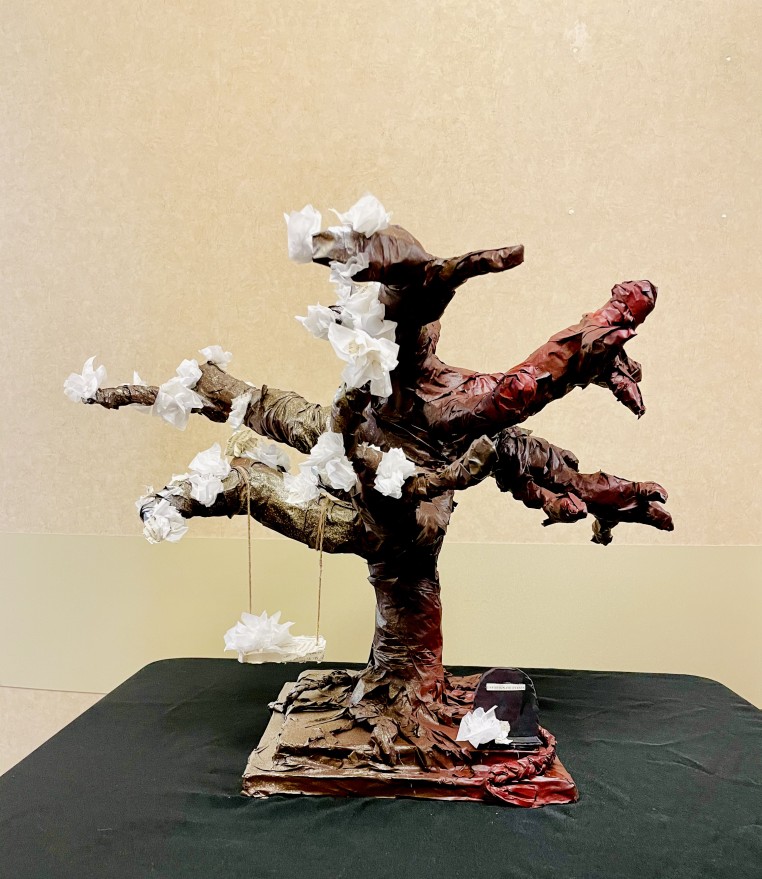 Past, Present, and Future

"While there is infection in disease and sorrow, there is nothing in the world so irresistibly contagious as laughter and good humor" (Charles Dickens). Like Scrooge in A Christmas Carol, you can be haunted by your past, your present, and what the future holds. Instead of fearing the worst, you can ask yourself what you want to see and what you can do to get there. In our past, we've been slaves and slaveholders. Billions of people were killed during the Holocaust. We fought battles for equality and justice, but these troubles don't just haunt our past, they exist in our present. People are killed because of the color of their skin, the religion they practice, and the people they love. Instead of guns, violence, racism, and sexism, our world could be brighter where people are recognized as equals, celebrated for differences, and ultimately, safe from injustice. 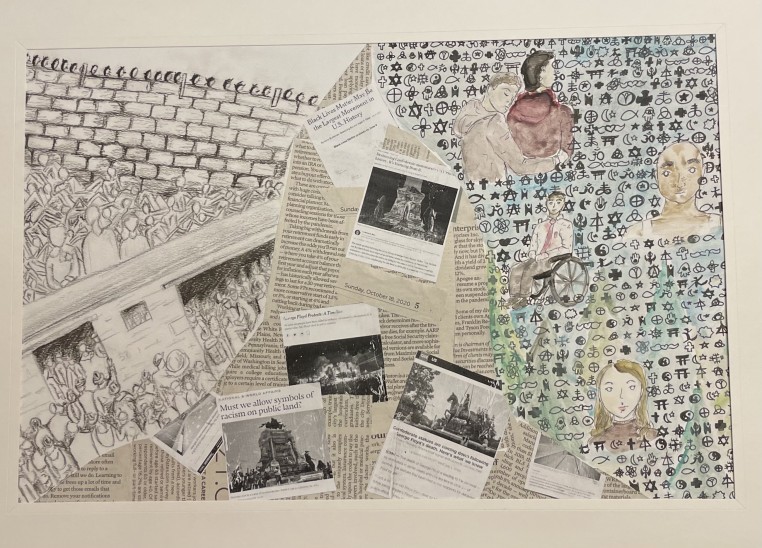 I chose to target the injustice in America towards the numerous movements for women, the black race, and the rights of the queer community. I am a black man that has witnessed and experienced racism. Because of my experiences, I’ve taken it upon myself to be an advocate for my cause since middle school through my art. In many cases, my art pictures black people more than white people because I feel that the emotions of black people are never really captured in the true light from the perspective of an artist that is not black. You don’t only see this in my work but also in works from artists such as Emory Douglas; it is a stance of black appreciation of our history and self-being. 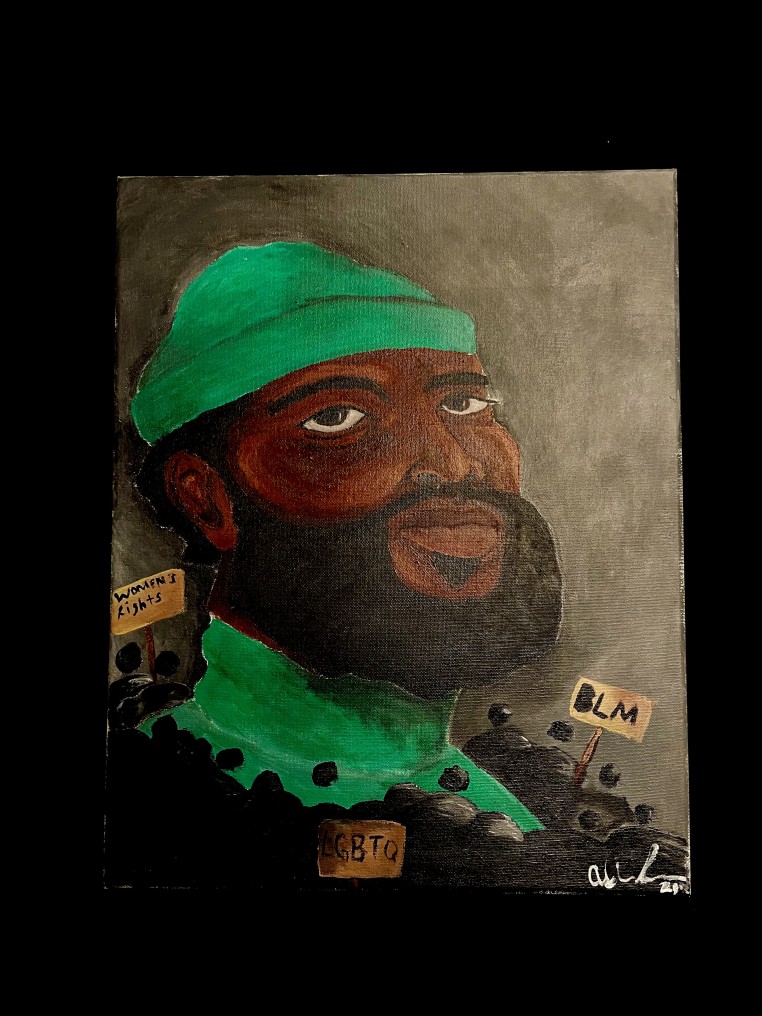