My piece represents how the Earth has fallen off its steady base and is quickly breaking apart. The traumas of the world both past and present have caused this to happen. 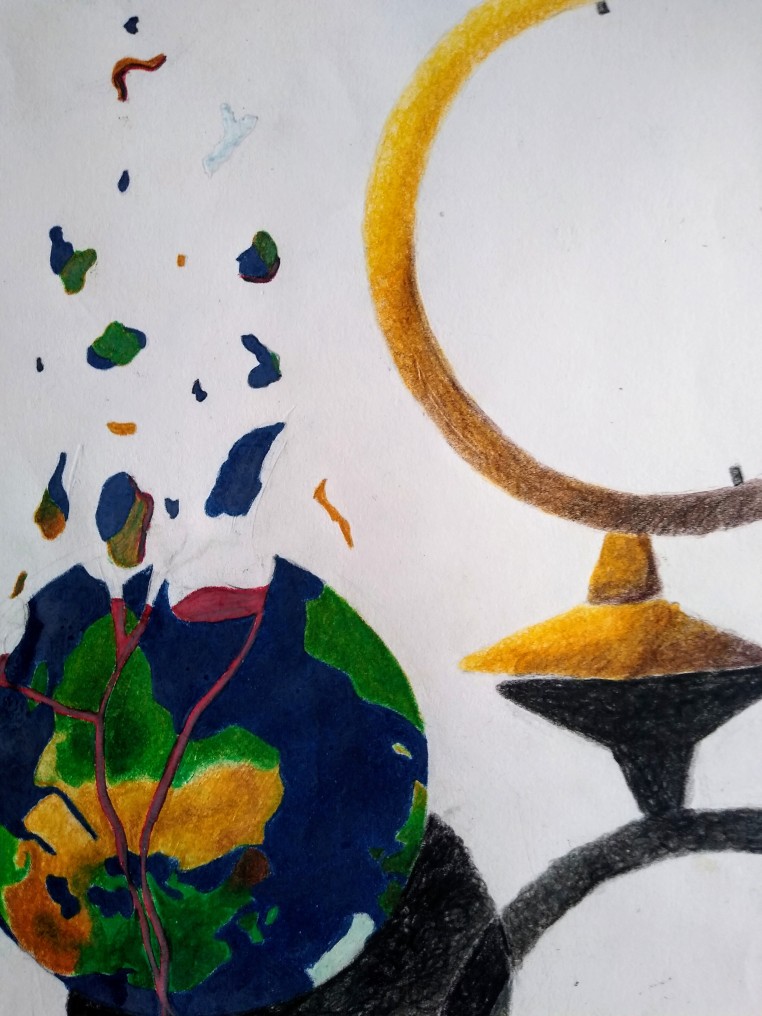 I chose to base my piece off of the song I Believe. The song is about a man in one of the concentration camps who wrote this quote on the walls of the camp. 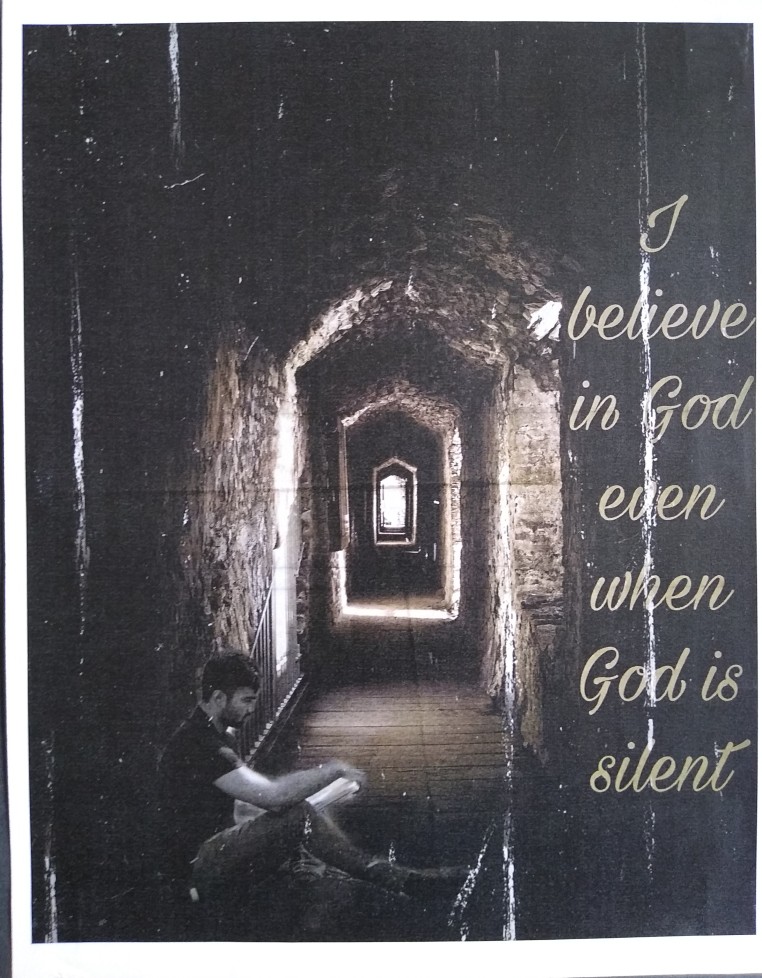 My piece symbolizes the mass shootings in our schools that have occurred throughout the years. 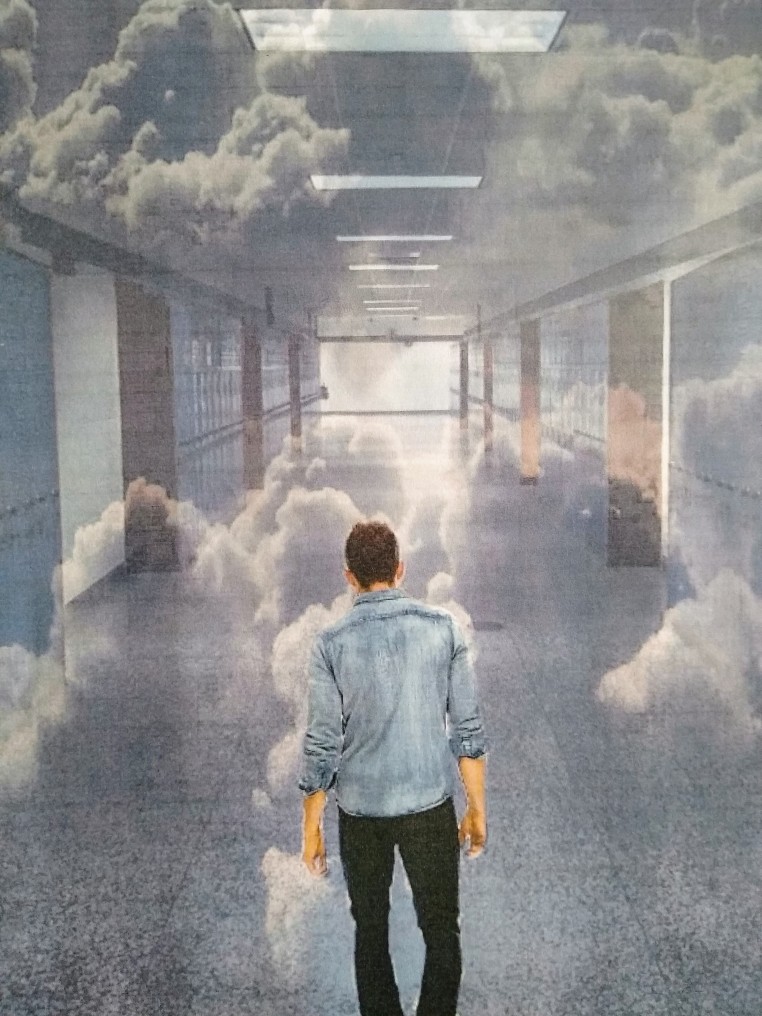 The Lost Soul represents all of the souls that died in the Nazis’ concentration camps that have been forgotten by today’s modern society. This art project also represents one specific girl that had made it out of Auschwitz alive, named Henia Bryer. The number that you see was her “ID” number when she was held in the Auschwitz concentration camp. My project is simple, raw, and powerful to one’s heart. Millions of Jews were brutally murdered at the hands of terrible Nazi soldiers, and yet some do not even try to think of the pain that each and every one of those people suffered. I feel that in today’s modern society, we do not know and remember enough about the Holocaust. The subject of this project, Henia Bryer, was only fourteen years old when she was taken into her first concentration camp, Majdanek. 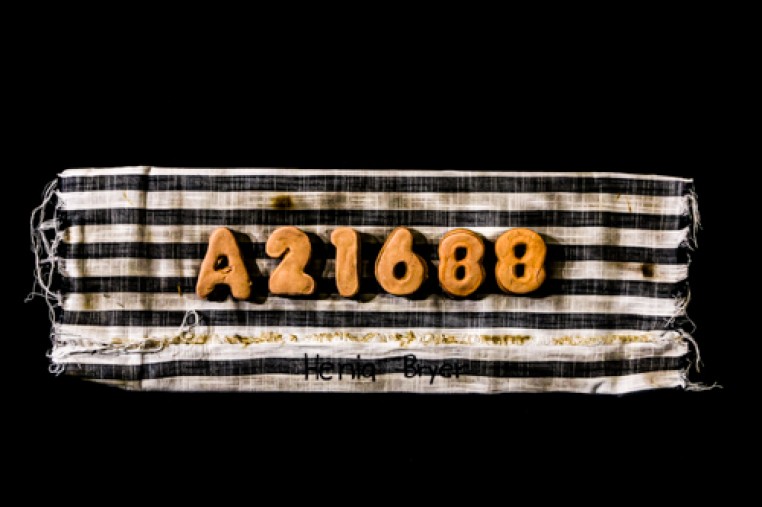 The world is beautiful. In times of terror and misery, we rely on the little things to keep us afloat. In this picture, the little girl is clinging on to the flower, like she might cling on to a parent who is no longer there. The light in the flower makes you notice the darkness around, just like a strong leader could. 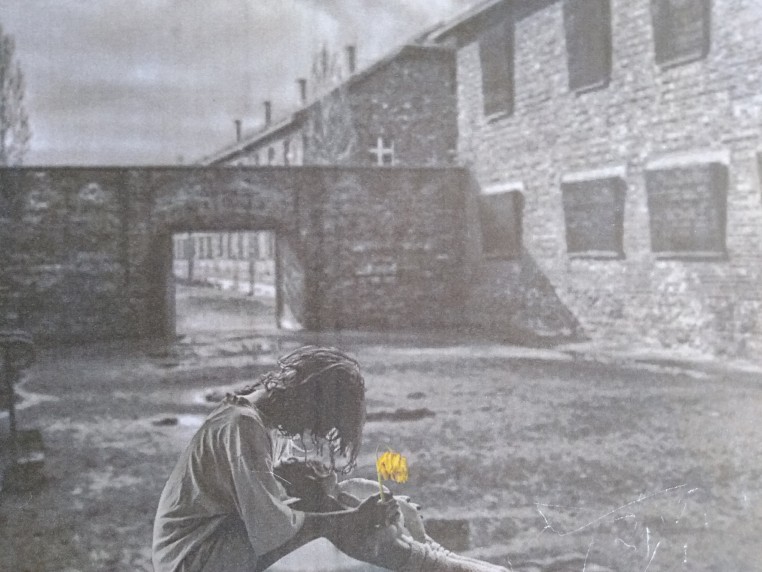 The message that I want people to give when they see my painting is, when people all join together as one for the greater good all of the big problems become nothing at all. My way to give this message I painted Earth with a huge person on it holding papers with problems of today’s society. The person is made out of puzzle pieces that are all different to represent people in the world joining together to solve all of those problems that are no longer on the Earth because the bigger person took them off. The person is separating the problems from Earth to show that when many amazing people work together to get something big done they can easily lift it off their shoulders. When people come together for the greater good we can make incredible things happen. 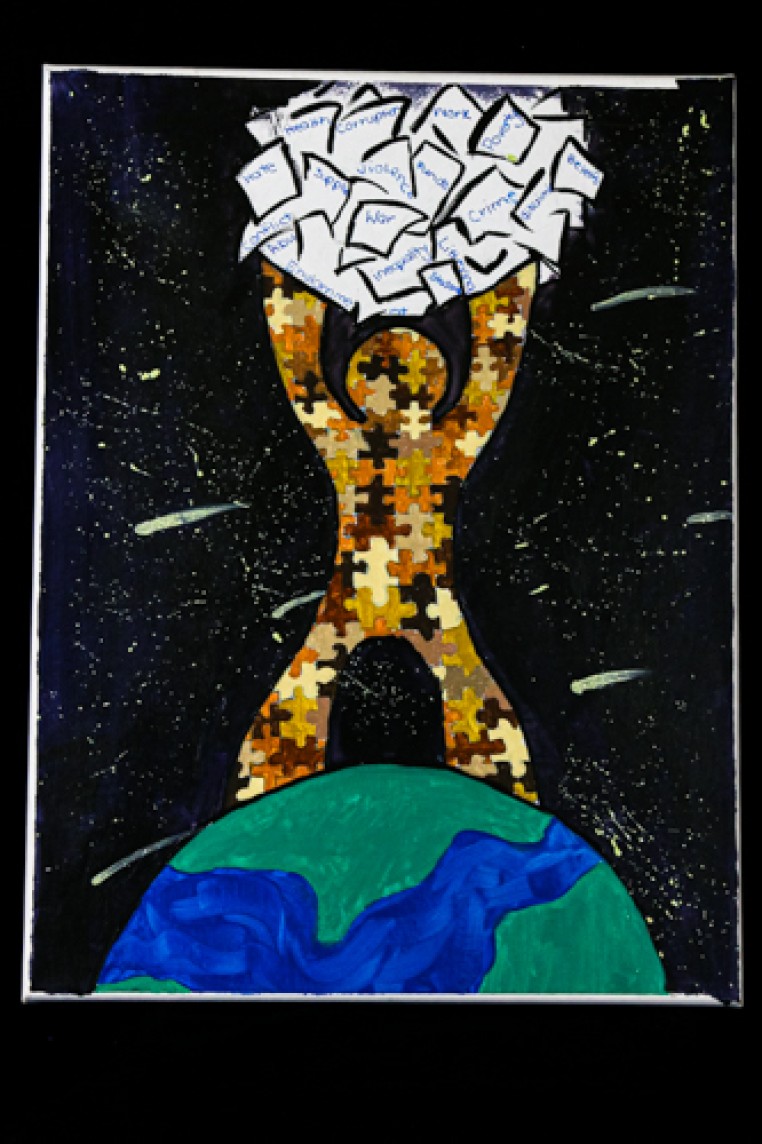 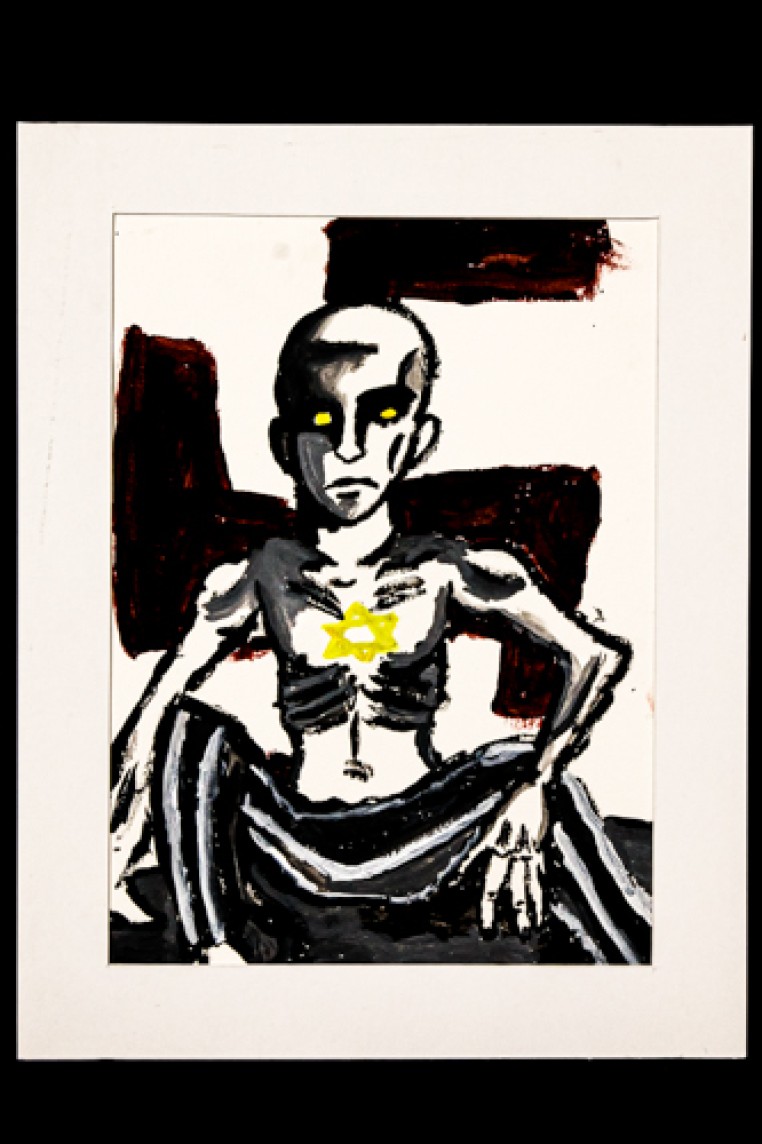 “Dead people receive more flowers than the living ones because regret is stronger than gratitude.” -Anne Frank. To reflect this, flowers are equal to people. The glasses with the Swastika are to represent the German soldiers, and there are more flowers to show more people were dejected by the loss of German soldiers. The one flower on the glasses with the Star of David, to represent the Jews, shows that fewer people were broken-hearted by the loss of Jewish individuals. This is to manifest how the public often overlooked Jewish people. Although if you take away the Star of David and the Swastika, it’s just two pairs of glasses with uneven treatment. The color black is a symbol of power and white is symbol of hope and faith. This is to show that more people cared about the power dying, while the Jews had a more faithful and hopeful outlook on life. 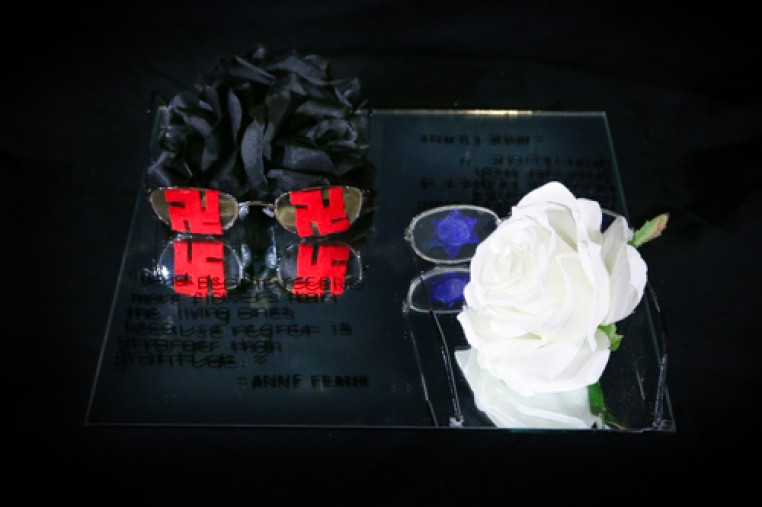 Reaching Out for Hope

There needs to be more understanding on this chaotic and tormenting event. 6 million. Every single one of them died because they were hated. Not by everyone, but just by one man. A man who had gained overpowered to the point where he could do whatever he chose. So he chose to exterminate all the Jews in the world. Each one of those Jews suffered a harsh death. All because of one man’s opinion. This one man became everyone. He was seen as a hero because of what he did. All of the people that died were innocent, just like you and me. We do not deserve to die because of one man’s opinion on us, meaning that none of the Jews had to suffer a terrible death. Let’s put our feet in their shoes and understand how terrible this was for all of them. Even some of those who had survived wished to not survive. The things they experienced were too harsh to get through. Every member of the Nazi party was responsible for the pain the Jewish humanity went through. 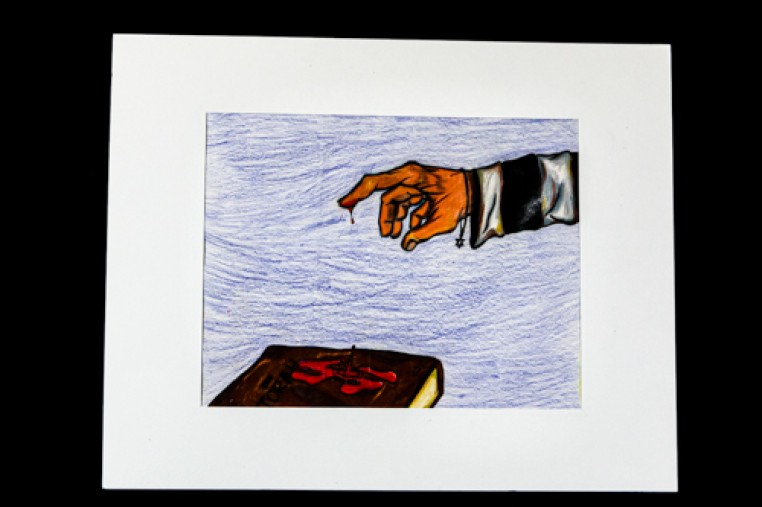 Equality Through All Eyes

Everyone deserves equality, no matter what their race, size, etc. My piece is relaying the message that we are all equal besides our eyes. Our eyes see everything differently, we see what is most important. Eyes have the possibility to view everything and anything. Everyone should be treated with justice and equality and the world should be all able to see that! 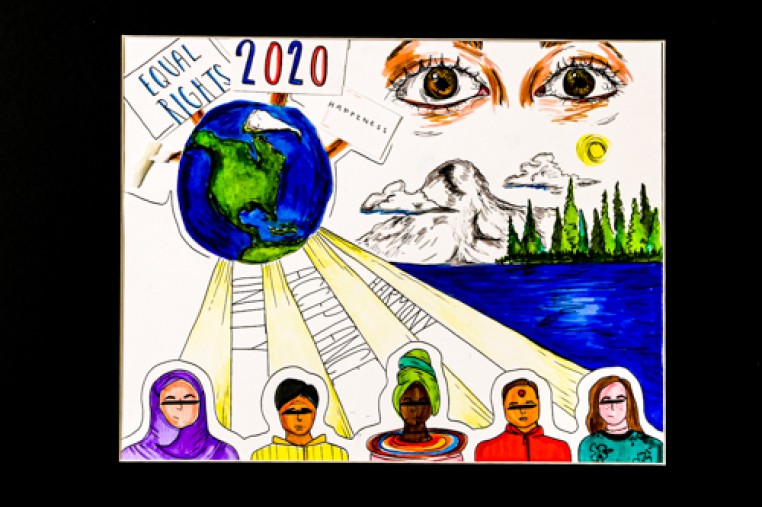 My computer graphic simply symbolizes the enormity of the Holocaust. 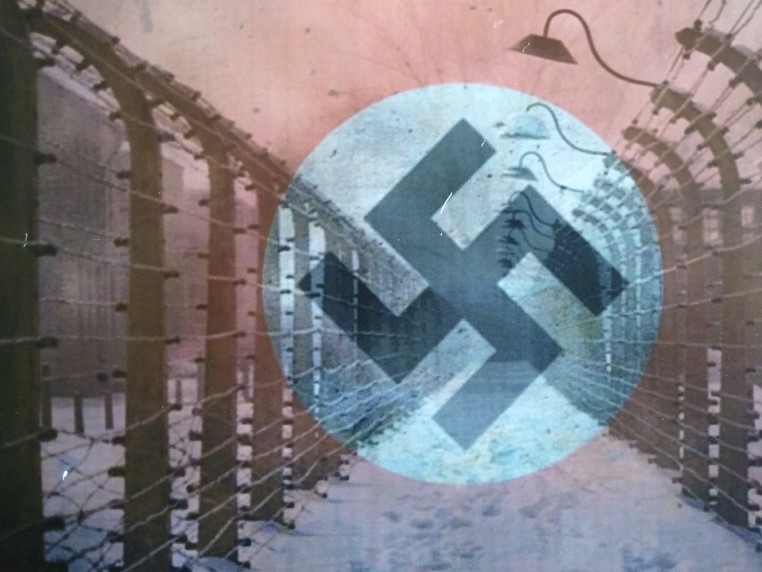 While I was learning about the Holocaust and the effects of what the Nazis had on them, I wondered what effects the Nazis have had on us. When we see anti-Semitism today it isn’t mainly in the form of mass genocide like the Holocaust, but in ways such as graffiti and shootings directed towards Jews and their places of their worship. With my piece I have a drawing of an eye, an eye with more colors than usual. The whole idea for this drawing is where, with all of the color and the memories and horror of what had happened to the survivors whose stories are told today, we need to hold onto these stories and try to stop anti-Semitism today, and prevent people from having to see such violence. 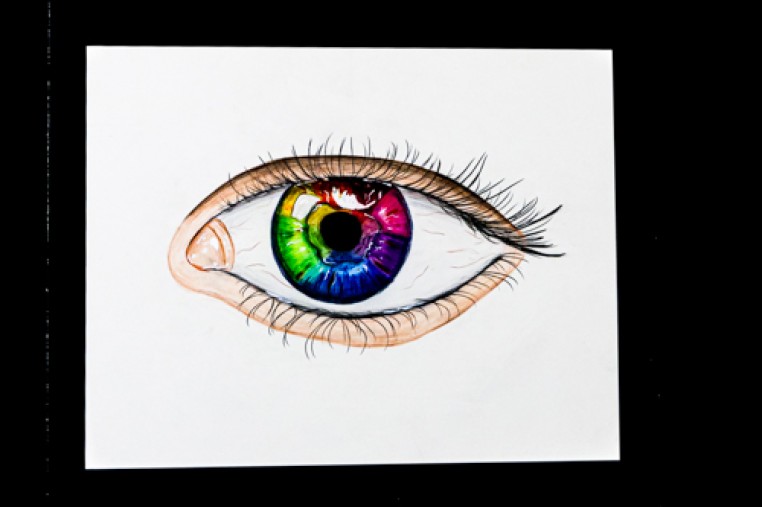